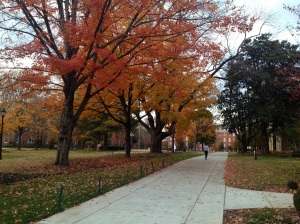 If asked to compose a list of cringe worthy statements  commonly uttered by young people, “Education is a waste of time” would top the list. I clearly understand the entanglement of debt and higher education in this country but I find the continual devaluing of education by my peers and those in the upcoming generation extremely problematic…especially by African Americans. Our leaders have historically changed the livelihood of African Americans and “people of color” (even though I find the term problematic) in this country through scholarship.  Whether it be formal education or self-taught. From Booker T,  Dr. King, Zora Neal Hurston, W.E.B Dubois, Angela Davis to Maya Angelou, Shirley Chisolm, Cornel West, Mae Jamison and our President Obama (just to name a few of my favorites). Black excellence has been and can continue to be achieved through and in conjunction with scholarship. We can not afford to abandon the privilege to be educated in exchange for the values of a society that was never established for our persistence nor ascendancy. Dollars are not the unit for measure of success nor does influence equate to power, as commonly perceived. We can not allow the paths that so many who have come before us have fought,  cried and died for become overgrown and muddied. We must continue to pave and brighten those paths as success is generational. America’s narrow affinities for entertainment, superficiality and neoliberal ideologies of individualism and use-value for sole capital gain, have never and will never be the avenue for continued black excellence in this country. Some may say America’s infatuation with glitz and celebrity and indifference for education and scholarship are what pain American persistence and position on the global stage. If so, they will plague African American prosperity.